Juan Carlos Pinto: A “Reactionary” Artist With a Unique Vision 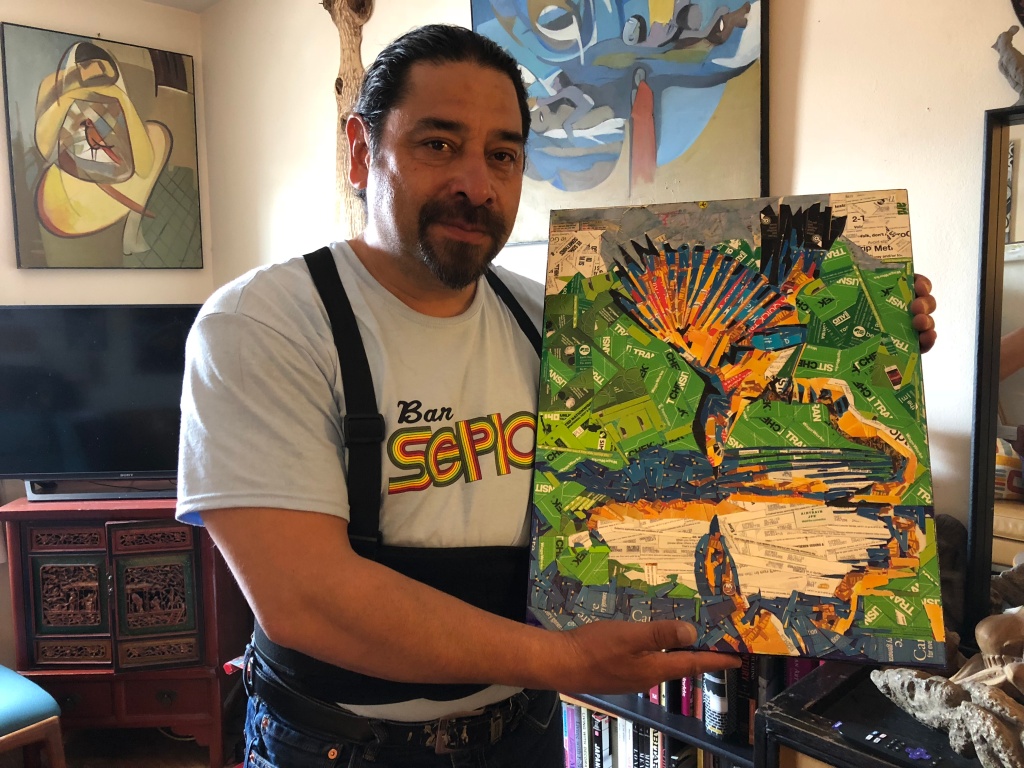 With his hair tied in a bun and donning denim overalls stained with specks of paint, Juan Carlos Pinto is unique by all standards. There’s his occasionally far-too-outspoken character. Remarks like, “The problem is I’m an opinionated asshole,” aren’t unusual to come out of his mouth.

Then, there’s his interest in using cut-up MetroCards as a form of art, which was born from an unpleasant experience with the Metropolitan Transit Authority (MTA). Or, even his love for creating mosaics, which he credits to the fact that he “likes to break things.”

Pinto’s unorthodox character and ideologies, as well as his past experiences, have served as the inspiration for his artwork.

Originally from Guatemala, Pinto has spent his time in the United States — specifically, the neighborhood of Flatbush in Brooklyn — chasing his dream of being an artist.

“I came to New York specifically to become an artist, to embrace art as my form of life,” he said. “If I stayed in country, I don’t think I can do that because it’s still a narrow-minded little village mentality.”

Pinto immigrated to the United States in October of 1998, just two years after the Guatemalan Civil War ended. The war — fought between the government of Guatemala and rebel groups comprised mainly of Maya indigenous people and Ladino peasants — lasted from 1960 to 1996. More than 200,000 people were killed during the 36-year-long civil war.

“The ‘80s in Central America in general was not an easy Sunday,” he said. It was “very volatile, very violent and all my generation witnessed a lot of violence. When you grow up, there’s nightmares in your dreams.”

Art was his savior.

“The embracement of art as my form of life definitely keeps me going,” Pinto explained. “Art is not my therapy or my medicine, it’s my kind of mission.” He ended with a shrug.

To choose a new home after deciding to leave Guatemala, Pinto thought about all the different places that could help him develop as an artist. He considered Paris, but asked himself, “Where [was the art scene] happening?” Brooklyn was the answer.

“As an artist, I have to choose a city where [I] can be an artist without paying attention to what people think, that kind of liberation, freedom… Brooklyn was a good option to try to be free,” he said. “That was a conscious, logical decision to try to be an artist in Brooklyn.”

Still, he wasn’t able to become a full-time artist right away; otherwise, he literally would have been a “starving artist.” His first (and only) job in New York was as a waiter at The Crooked Tree, a French creperie located in the Lower East Side. Pinto made a living as a waiter for 10 years and noted that working in the food service industry was much different than it is now.

“The customer didn’t ask for a decaf or a low-fat or two percent, or twocaccino,” Pinto said. (He probably meant cappuccino.) “It didn’t exist in that time. It was a very simple service, and they were friendly.”

He even met his wife, Amy, during his time as a waiter. The two are now married and have a 14-year-old son, Joaquin.

“She was my customer,” Pinto noted about his wife. “She’s a good person; she accept[ed] my craziness… I’m lucky.”

This customer-centered interaction also helped him break through as an artist.

“You realize you’re becoming an asset when people start giving you money in exchange for your artwork,” he explained. “That’s when you say, ‘Okay, what I’m doing has an economical value.’”

One day in the early 2000’s, Pinto was trying to return home using the Metropolitan Transit Authority (MTA), New York City’s public transportation system. His MetroCard was just 25 cents short of having enough fare for one ride. As a result, he jumped the turnstile, and he was immediately stopped by a cop who gave him a ticket for fare evasion. (Pinto did not end up paying the fine because he had shown the cop a fake ID.)

That inconvenient experience with the MTA served as the inspiration for his first well-known form of art. He was also the first to popularize the use of MetroCards as an artform.

“I’m a reactionary kind,” he said about being fined for jumping the turnstile that day. “If you upset me, I’m gonna paint you. Or I’m gonna sculpt you… I gotta take my revenge.”

“That’s Carlos’ attitude about life,” Dunn added with a chuckle.

This can be seen through Pinto’s mosaics, another artform he is known for. One of these mosaics, a compilation of various pieces of broken-up plates, is located in the south wall of the Newkirk Plaza passageway.

However, it was the first mosaic he created that Pinto holds especially close to his heart. This mosaic, at Rivendell School — a preschool in Brooklyn — was Pinto’s way of giving back to the school. His son was a student at Rivendell, and Pinto felt so grateful to the school that he proposed a big mural for the playground. The school accepted his idea, and Rivendell was not the only party that gained something from this experience.

“That was some kind of epiphany for me,” Pinto said, reflecting on putting the mosaic together at Rivendell. “Because I felt I can do that without hesitation, without doubt, and say, ‘Dude, you found your media.’”

From there, Pinto expanded on his work with mosaics, and he has created over 30 mosaics. Culture Trip even lists “the street art of Juan Carlos Pinto” in a 2017 article titled, “Top 10 Things To Do And See In Flatbush, NYC.”

Pinto believes that mosaics are an effective way to leave behind a legacy, considering their enormous sizes and efforts that go into creating them. The fact that many of his mosaics are displayed in public spaces also ties into one of his philosophies that others admire.

“Carlos believes that art is a right and the fundamental right and not a privilege,” said Chris Guida, a friend and regular customer of Pinto. “His motivation is to create art that can be seen by everyone, not just something that you have to pay to see, and that’s pretty inspirational.”

However, while Pinto has clearly discovered his art specialty, he still struggles to characterize his art style.

Going beyond just “finding his media,” Pinto has widened the scope of what his art represents. He particularly likes to incorporate the image of birds in his art to express a larger political message.

The first time Pinto depicted birds in his art was for a mosaic at P.S. 217, an elementary school located in Flatbush. In 2011, Pinto received a grant from the Brooklyn Arts Council and proposed a mosaic that uses a variety of birds. The outcome was a mosaic that featured 27 birds, representing the amount of languages spoken in the school “as a celebration of diversity,” he said. Currently, Pinto is working on a series called “The Birds of Brooklyn,” which combines his use of MetroCards and birds as a symbol.

“It’s a chant of diversities, a chant of freedom,” Pinto said about depicting birds in his art. He paused. “It’s a celebration, and it’s a very elegant way to put a middle finger in the face of the contemporary concept of the president. Or not just the president, I’m talking about millions of Americans who think people like me come and take your job.”

“That’s the phenomenon of Brooklyn,” he said. Cultural immigrants “don’t need no visa to come and say, ‘Hello Brooklyn.’ It’s like I can’t divorce my political standpoint of view from my art, and maybe that’s economical suicide because… [of] the politically correctness of the country.”

Pinto has enjoyed his nearly-two decades worth of experience in Flatbush, noting the neighborhood’s diversity. Still, he recognizes the gentrification in Flatbush — which scares him — and he is especially worried that it will erase the Caribbean and Jamaican “flavor” of the neighborhood.

“It’s becoming [homogeneous] and people of the same social economic standard or way of thinking,” he explained. “I’m not scared of equality; I’m scared of people who look and act like the same. It’s boring.”

That isn’t a strange belief for Pinto, considering he can speak six languages (he considered the number to actually be five and a half): Portuguese, Italian, Spanish, English, French and Ch’orti’ (the language spoken by the indigenous Maya people). “My father say, ‘If bullshitting is a language, you’re bilingual by nature,’” Pinto added.

In five years, Pinto imagines that he will still be living in New York. In a decade, however, he hopes to leave the United States and possibly return to Guatemala.

“I’m still not too old,” he said. “I’m still young, and I have an energy. Definitely, I want to make a few pieces of artwork out of this country.”

In the meantime, he will keep chopping away at tiles and cutting up MetroCards for his ever-growing collection of lauded murals.

“A paintbrush is more powerful than a gun,” he said. “I don’t want to stop a bullet, but it can say some shit louder than a bullet with a gun.”

Correction 8/12/18 6:09 PM ET: An earlier version of this article suggested that Pinto is worried about gentrification in terms of the neighborhood’s growing Caribbean and Jamaican populations. However, those are the groups of the community he identifies with — rather, he is worried about what gentrification will do to those populations. The article has been updated to reflect this. Eyes on Flatbush regrets this error.